Home » Spiritual Matters & Faith » Spiritual Principles » Should We “Make” Our Kids Forgive Or Is Forgiveness A Choice?
1.9Kshares

If you’ve ever made your kids forgive their siblings, even when they didn’t mean it, you understand. Forcing someone to forgive isn’t forgiveness, or is it?

“Will you forgive me?”

A very common phrase. It wasn’t until a few weeks ago, however, that I realized I dislike hearing children ask each other for forgiveness. It rubs me the wrong way. And I’m not going to teach my kids to do it.

I will teach my children to forgive.

I’ll create a home atmosphere of grace and forgiveness.

I will actively train their hearts not to hold grudges.

But I will not teach my kids to ask each other for forgiveness. Why?

Because forgiveness is a gift. And you’re not supposed to ask people for gifts.

Jamie and John are brother and sister. One day at school John’s friends start mercilessly teasing Jamie, and John doesn’t say a thing in her defense, but laughs along with them. Jamie is hurt by the teasing, and even more hurt because her brother didn’t stand up for her.

So now a few things have happened. Jamie’s feelings have been hurt and the brother/sister relationship has a breach. By encouraging John to immediately apologize and Jamie to forgive, without working through this situation, you’d be encouraging

Jamie to stuff her feelings and move on. And you’d be teaching John that a few words lets you off the hook.

This may mean John never gets a chance to feel remorseful and make amends. And that Jamie says “I forgive you,” but deep down holds a grudge. Because grudges aren’t always from a refusal to forgive, but often from unresolved feelings.

Forgiveness is a process that should not be rushed.

It’s the injured party who should forgive. There’s a great quote about unforgiveness I want to reference here, because I don’t want anyone to think I support holding grudges.

By teaching our children to go to their sibling right after they’ve hurt them and say, “I was wrong, please forgive me,” you’re putting pressure on the other child to reach a point in the forgiveness process they may not be at. There should be time to release their feelings, not stuff them in their emotional basement .

Forgiveness must come. Not because someone asked for it, but because it’s the right thing to do.

If Jamie is made to “forgive” before she’s ready it will be false. She may not have actually forgiven and might even feel more resentment towards her brother because she’s supposed to just be “over it.” Nor will John have learned that real life consequences exist when you hurt another person.

Saying you forgive someone is not the same as forgiving someone.

If our children learn that saying, “I forgive you” is all that forgiveness is, they are deceived. Though forgiveness is a freeing action it can be extremely difficult. Oh sure, a kick from a brother, a small white lie, one sibling taking something without asking… these aren’t major heartaches.

Some things can be forgiven quickly and there is no need to dwell on it. Still, a child must engage with what’s happened and then choose to release that person. That is forgiveness. But they won’t do that if your house rule puts them on the spot to respond to the “guilty” sibling with “I forgive you.”

Forgiveness is a choice, a gift.

Forgiveness is a must for us, for our own benefit and well-being. But, to the person who receives the forgiveness, it’s a gift. Would you go up to another person and say, “Excuse me, I just drove your bike into a wall for fun. Will you hurry up and fix it so I can ride it again?”

No, no you wouldn’t. Why? Because you don’t hurt someone else and then ask for a favor. When you hurt someone you apologize with a humble heart and work to repair that relationship.

Instead of going up to them and asking, “Will you forgive me?” a better question would be, “What can I do to mend this?”

In the situation above, I would hope it played out like this. Jamie was able to take the time needed to work through her feelings. It hurt to be publicly ridiculed. It was embarrassing to be called names, and humiliating that her own brother would laugh instead of telling them to stop.

As her mother I would encourage her to process her feelings with the goal of forgiveness and reconciliation. I would allow John to feel the weight of his poor choices, and have him seek to repair and restore their relationship, but I would not undermine Jamie’s pain by thinking it will all be over with a “will you forgive me?” on the same night it happened.

In fact, some people may never extend that gift to you. Even if you ask nicely.

A humble heart offers an apology without expecting anything in return.

A forgiving heart releases the other from wrongdoing, whether or they ask or not.

I’ve created a free email series just for you! Mothers have a hard job. It’s a privilege and a joy, but the days can be long and life can make us weary. This email series is a 15 day devotional (all encouragement, no homework) that includes a Scripture, thought, and prayer. Countless women have said it was, day after day, the right word in the right season.

1.9Kshares
« Car Tips & Hacks For The Family Vehicle – You’ll Love These
How to Handle Anger Towards Your Child » 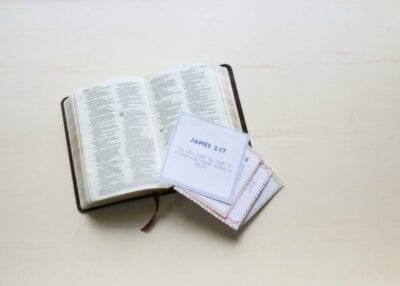 If you struggle in growing your faith or believing God's promises... life as a Christian can be tough. It's easy to say "have faith" but it's harder to do, so I created these cards to help you grow your faith by meditating on God's Word.