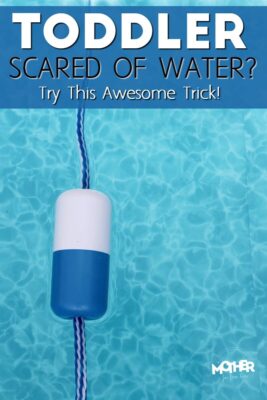 Is your toddler or preschooler scared of the water? This tip for your own pool will help your little one feel safe in the water.

It started when he was 1 year old.

He was very curious about the water, but terrified to go in.

My boy loved wearing his bathing suit and sitting on the steps. He enjoyed seeing his siblings flapping around and enjoying the water.

But swim? No. No he did not like doing that.

He screamed his entire first week of swimming lessons. I went out of sight, did not intervene or hover, and yet… he was so scared of the water.

Much to my dismay, he was so terrified he did not do anything but scream the entire time.

He screamed the whole swimming lesson

And when I say scream… I mean really scream.

As he went from 2 years of age to 3, his like for the pool remained the same, but he simply did not want to swim on his own.

He didn’t even want me to hold him in the shallow end. If I’d hold him and try to walk around the shallow end he would scream intensely and not be able to calm down and listen to reason.

Now I know why…

Toddlers can’t listen when they are really afraid

When kids are in an emotional state, the part of brain that is activated is their limbic system. This means the part of the brain that hears logic and reason is inactive.

So, no matter how many times I tried to reassure him, explain he was safe, or prompt him to try and swim on his own, he simply could not listen.

Read: Life Skills For Kids By Age (With Printables!)

He just screamed bloody murder until he got back to the pool steps.

Finally, I decided we needed to get to the bottom of this. He’s a bright child at 3 years of age and I knew, if I asked the right questions, I could get him to share his fear.

He wasn’t scared of getting wet or of sitting on the steps. He wasn’t even scared of leaning over the pool edge (much to my dismay), but he hated going into the shallow end.

Read:  The Crucial Elements of a Rock-Solid Toddler Schedule

I decided to validate my toddler’s feelings

I used my Love and Logic® training so my son would talk about the pool instead of screaming at the top of his lungs.

This is where the whole thing got interesting…

“Yes,” he said immediately, “I scared I gonna slide wight into the deep end.”

Immediately I knew… even though he’s tall enough to reach in the shallow end, the whole pool seemed deep and scary to him because he had no idea what area of the pool was safe and what area wasn’t.

The pool didn’t have boundaries

Although he knew that one part wasn’t all that deep, he was not confident that he could stay there. He was worried he’d end up in the deep end accidentally. So in that moment, I thought of an easy fix.

I got a pool safety rope.

The rope creates a clear division between the shallow end and deep end. Children who want to swim in the shallow can do so without worry they’ll “slide into the deep end.”

I immediately went on Amazon and sourced a highly rated and inexpensive pool rope.

Bam, two days later the rope came and I was excited to test out my idea. My husband and mother were still skeptical, but I felt I’d gotten to the bottom of my son’s fear and was ready.

We installed the pool rope together and I explained its purpose.

“On this end of the rope, the water is shallow. On the other end, it’s deep. If you stay on this side of the pool near the steps you’ll always be able to touch.”

He accessed his reasoning before he even had on his swimming trunks. Then, he repeated a few times which side was shallow and which was deep, then we were ready to get on our swimsuits.

He put on his shorts and we got in the pool.

I asked him to walk with and trust me. Then, I helped him touch his feet to the bottom and look around.

“Look at all that space in the shallow end. You can go all around without sliding into the deep end!”

As in much of parenting, boundaries create freedom and confidence. Within a boundary you know you are safe.

Since that day he’s been asking to get in the pool morning and night. He’s no longer frightened of the water and he jumps right in.

We’ve all had much more enjoyable pool time since there is no longer any screaming. He is no longer fearful or insecure and we’re prepping him for swimming lessons this summer to have an even greater understanding of water skills.

But we’ve crossed the first hurdle: getting him into the pool without screaming.

It’s a huge victory for him.

And sometimes, my friends, victory looks like a pool rope.