Home » Practical Parenting Tips » The best parenting advice I ever received: start out how you can hold out
558shares 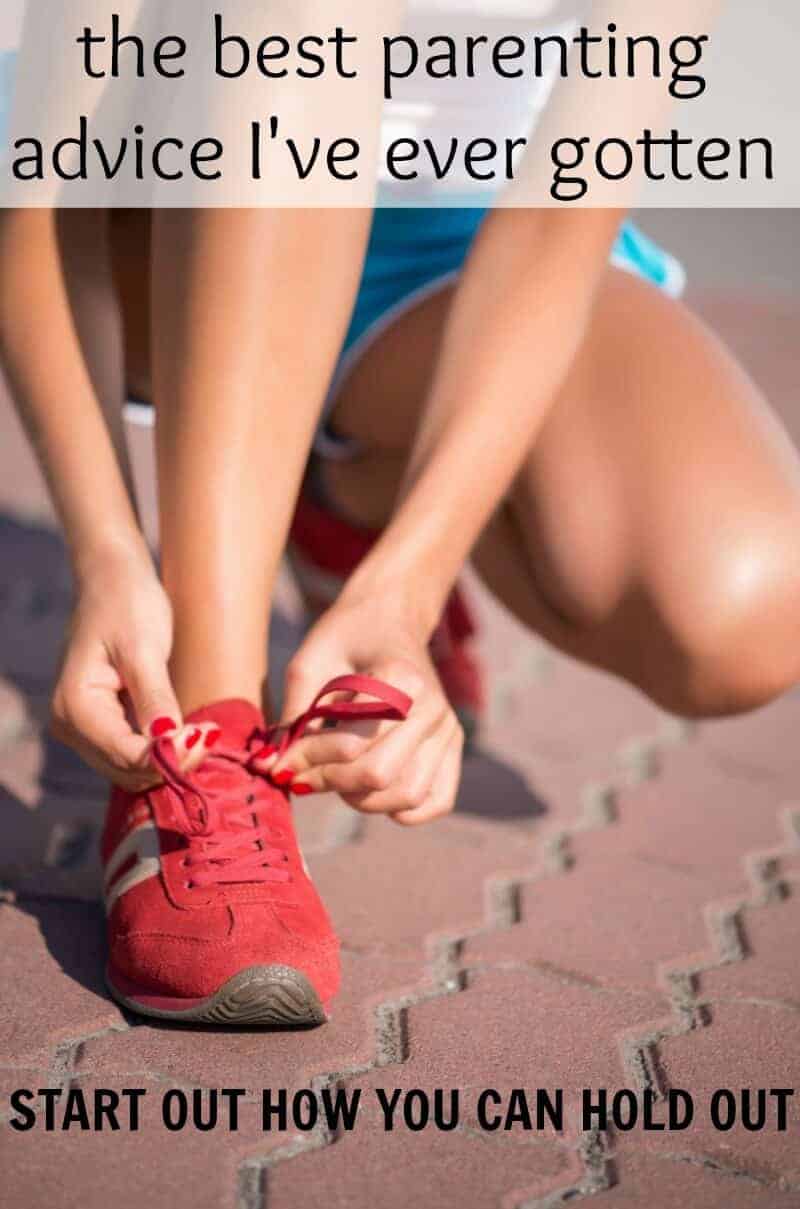 After I had my first child my grandmother gave me some sage advice.

“Start out how you can hold out,” she said.

Wise wise words. It has become a philosophy in our house and affected many parenting decisions we’ve had to make. Start out how you can hold out means not creating habits that don’t serve you well. It means not necessarily taking the shortcut if that starts a behavior you’ll only have to correct later. It means not doing something that will inevitably exhaust you and rob you of all your emotional and physical resources.

Think of  “start out how you can hold out” in light of certain behaviors that can easily become habits. These may (or may not including your own household, values, and principles) be behaviors to think about beforehand:

Thoughts on “start out how you can hold out.”

Word on the street is that habits can form after doing something only 21 times. Well, since we do a few things for our children around, oh I don’t know, 45 times a day, behaviors can turn into habits quickly. You can do one unhelpful but convenient behavior a few times a few weeks in a row and – bham – nasty habit formed. One such example is nursing or rocking your baby to sleep. Now I’ve nursed all my babies and love it. And I love all the hugging, rocking, and kissing I can squeeze in. However, I am also a firm believer in putting your children into their crib awake (drowsy, but awake) so they can learn to put themselves to sleep. (Of course nursing to sleep is not a problem unless it’s a problem for you.)

If you nurse a baby to sleep for one week, that’s over 50 times that you’ve done it. Think about doing it for a few months… that’s over 500 times you’ve consistently done the same behavior. The baby depends on it and needs it and, soon, you are unable to keep up that intensity any longer because you’re exhausted. We’ll necessarily do things differently for our children at different developmental stages but keep in mind that what you do consistently will become the norm.

2) Kids get used to things and don’t want to change.

Even adults hate change so why wouldn’t children? There are lots of little things you do that kids will get used to and consequently become “dependent” on. This is not a bad thing in itself, as routine does bring security. In fact, there’s a lot of good in doing things consistently. Bedtime routines, chore routines, and rhythms your family adopts will have a positive and beneficial effect on your kids. But, depending on the behavior at hand, it may be something that’s a lot harder to stop than to start.

Take negotiation, for example. I found myself a few months ago knee deep in negotiations with two of my 4 kids. All day they wanted to argue with my instructions and I felt so frustrated. I zoomed out (something I’m a big fan of) and realized that I’d begun letting them negotiate. It was frustrating for everyone and I simply couldn’t keep it up. In the moment at first it seemed easier letting them argue with me instead of enforcing the instruction, but later it became overwhelming as the kids had gotten out of the habit of obeying me without a lot of cajoling.

3) It’s not about right and wrong, it’s about sustainability.

Everyone on earth is unique. That is a blessing from God and who would want it any different? Since we are all different and our family dynamics vary, there will be some things you do that I don’t do and some things I do that you wouldn’t. Aside from neglect and abuse, I think many areas of parenting come down to your personal and family priorities, values, and preferences. Most of the tips I suggest here are not what I think is the only way, but simply, what I have found to be the easiest way.

I don’t mean easy in the short-term. I mean easy in the long-term. And those are two very different things. By starting out well and setting a good pace, I’m positioning my child and myself to “succeed.” If I start a marathon sprinting I simply won’t make it far without injury and likely will never finish.

Time and time again I’m reminded that the shortcut is rarely the better way. What we do in the moment that seems convenient is often just putting of the hard work until later. That’s a little thing known as credit card parenting. Rarely is it a good idea to take the easy way now and put the hard yards off.  Plant first, harvest later. Now, something I consider to be annoying may not even phase another mother so understand, this is all relative. The point is that if you begin working towards your goal immediately, you’ll arrive sooner.

We all do it. We all take a few shortcuts here, there and end up in a habit with our children that drives us bonkers. It can happen at any stage of life with children of any age. If we just keep the idea “start out how you can hold out” in the back of our minds from Day 1, or starting now, then we’ll likely avoid having to correct undesirable habits later.