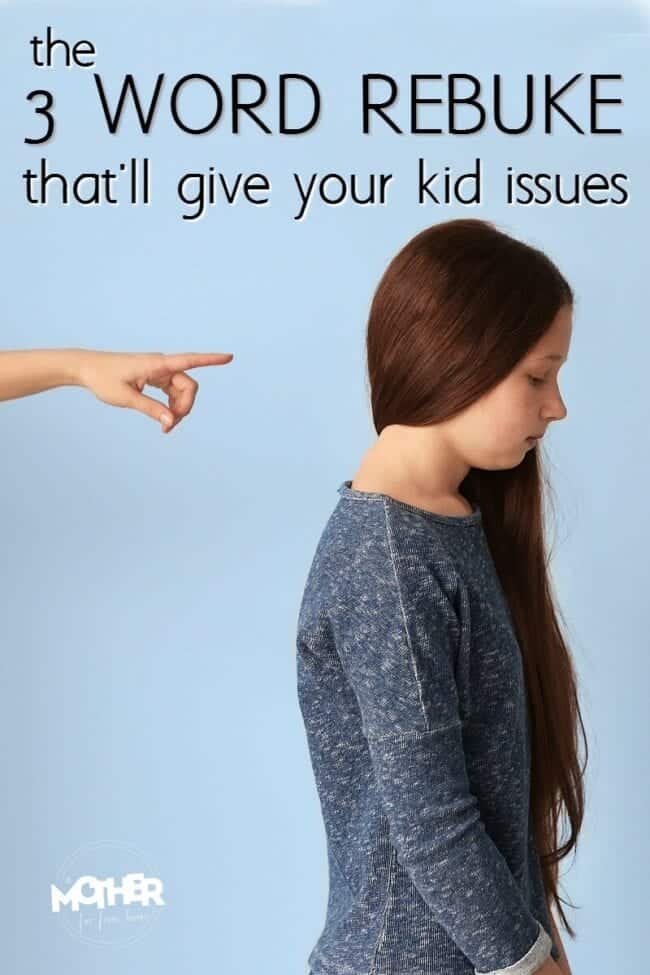 Inside: We’ve already covered the 7 words a mom should never say to her kids… now here’s a word we’d all do well to cut out of our vocabulary. There are some expressions we simply shouldn’t use with our kids. This is one of them. Shame on you is one of those phrases we shouldn’t use.

I head a big scream, a door slam, then a lot of crying.

My husband came down the hall to put another child to bed when I asked him what was wrong. He said our son had screamed very loud and forcefully at an elderly family member so, since bedtime was imminent, he’d sent him to his room early.

This is our son with big emotions, who can be a master whiner, and a perfectionist. He’s hard on himself, but he’s not mean-spirited. I went to investigate. I found my son on the chair in his room whimpering. 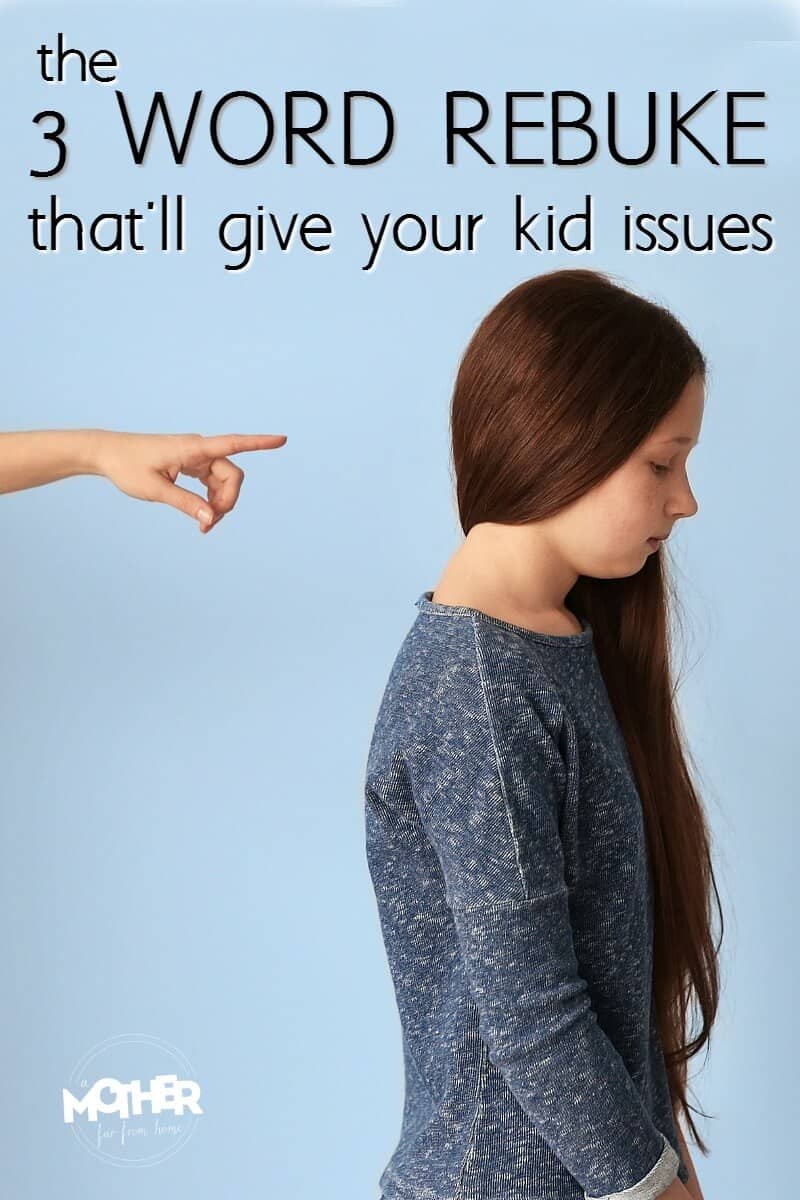 I went to him and pulled him near for a big hug (Cuddling is good for kids’ brains, didn’t you know?). I waited a minute then asked as casually as I could, “What happened, son? Why’d you scream in her face?”

Then he adopted that defensive tone and said, “Because she told me ‘shame shame shame on me.'”

Because I’ve had good long talks with him about our actions and our “selves.”  Even at his young age, he knew that feeling ashamed of himself was not good. Even if “shame on you” was just an expression.

Why “Shame On You” Is Not A Good Idea

According to Brene Brown…

Shame is the intensely painful feeling that we are unworthy of love and belonging.

Of course “shame on you” is just an expression to show disapproval for one’s actions. The user isn’t actually trying to heap shame on the listener, but it’s often the body language and emotional cues that accompany the expression “shame on you” that are actually damaging.

And I’m not being dramatic.

Shaming Focuses On Their Personhood Not Their Actions

Our kids will do things they should not. Both childish things and foolish things. They’ll push the boundaries and test whether or not we’ll follow through on our words. This is right and good and normal and exhausting.

The key is to help children understand the consequences of their choices. Cause and effect. Sowing and reaping. This is how we go about not raising kids with victim mentalities.

When we shame them, we aren’t focusing on how they can make a better choice next time, we’re focusing on why they’re bad for doing what they did. It’s the wrong way to go about it and, furthermore, it doesn’t have the desired effects.

We are reasonable moms, let’s figure out how to respond to negative behaviors without screwing up our kids. More than the normal amount, anyway.

None of us want our children to develop an inferiority complex. We surely don’t want to be the cause of their emotional struggles and insecurities. Kids are born curious. They want to know what’s right to do and what’s wrong to do and they respond well to praise. When you focus on a child’s actions, they understand how they can improve next time.

By saying things like “shame on you” or “why would you do that?” with a disgusted look and tone, they feel they are somehow wrong. Then, when they’re busy internalizing their inadequacy, there is no room to teach them what you wanted them to know in the first place.

They’re too busy feeling ugly feelings to understand that it’s their actions that upset you at the start. 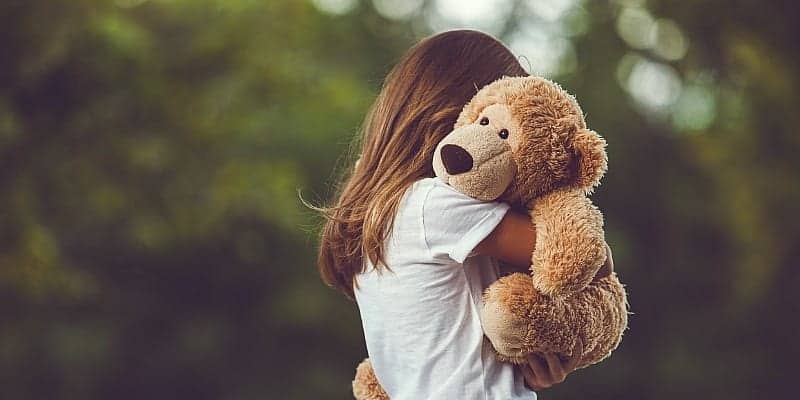 When we shame children we can actually confuse them. Instead of calmly explaining why what they did was wrong, we’re saying they are wrong. Now, this isn’t to say we can’t be extremely anger about certain behaviors. We can get angry at things without being angry mamas.

Which leads us to my next point.

There’s a difference for feeling guilty for doing something wrong. This is good. This helps us to make better decisions in the future.

But false guilt is bad and cumbersome.

False guilt is a general sense of doing or being wrong. It’s very close to shame except we think it’s guilt so then we’re always busy trying to “do better next time” even though we don’t know what we did wrong in the first place.

“Guilt is just as powerful but it’s influence is positive while shame is destructive. Shame erodes our courage and fuels disengagement.” Brene Brown 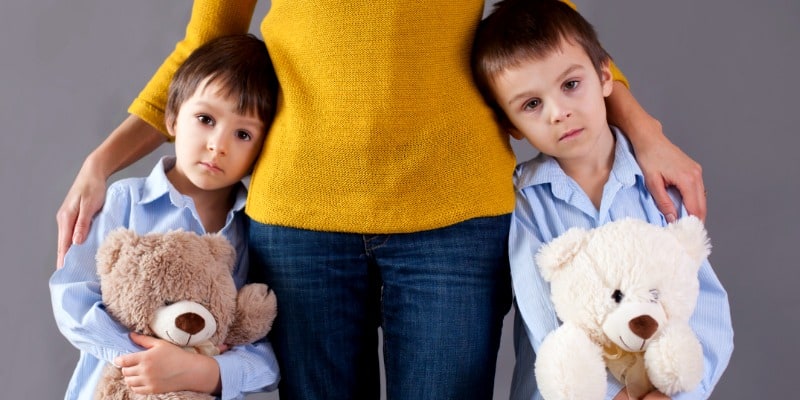 If we act ashamed, tell our kids we’re ashamed, or treat them as though something is wrong with them, they develop this cloudy hard-to-put-your-finger-on-it feeling that they are not doing what’s right.

This creates worry, anxiety, and an intense desire to please others that manifests itself in unhealthy ways.

In the end… we made sure my son knew he was not supposed to scream in anyone’s face, much less an elderly family member. He genuinely apologized and made amends.

But we also made sure he knew he didn’t have to be ashamed even though he felt bad.

I’ve created a free email series just for you! If you have a little one aged 1 to 8, this series will help transform your home environment. No, that is not a joke or false claim. You can let your kids express their emotions without raising back talkers who meltdown at the drop of a hat or throw a tantrum every time they are unhappy with something. After this free email series: 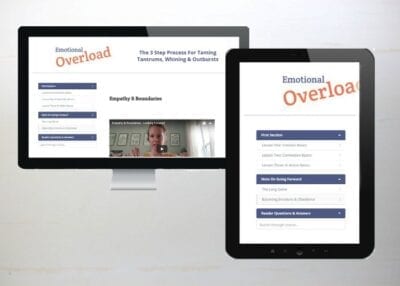 If emotions are high at your house and you're always bouncing back and forth between being too harsh then feeling guilty then being too lenient, this course could be the ticket!