This post on must read book series was inspired by a post I put on my Facebook page last week. I am honestly never disappointed when I ask you guys a question. I get such great answers. Post contains affiliate links

Here are some book series you simply have to read and will not want to put down. 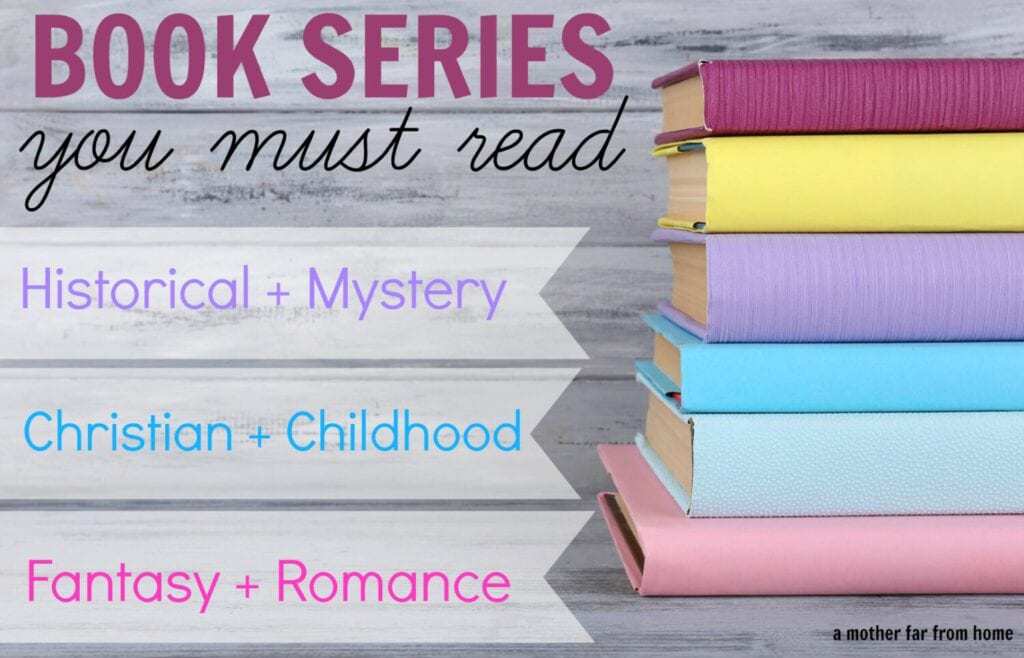 Diana Gabaldon has created a serious cult following with her historical fiction books set in Scotland during clan times. It’s sort of fantasy, but not really. It’s a love story and a war story and a history lesson and completely and utterly addictive.

The books span decades and travel across continents. The books are each long and full and everything in the house goes to pot while you are trying to put it down. Without success.

(Note: there are some intimate scenes that, while not lewd, are what I’d call “raw and emotionally graphic.”)

Or you can buy the entire series here (by far the best value for money).

Another series of historical significance, this mystery series by Tasha Alexander follows Lady Emily in Victorian England. It’s said to be meticulously researched and deals with the role of women in society during that time.

From the drawing rooms and ballrooms of London to country estates, journeys to exotic locations, and everywhere in between you’ll follow Lady Emily as she uncovers clues.

1. And Only to Deceive
2. A Poisoned Season
3. A Fatal Waltz
4. Tears of Pearl
5. Dangerous to Know
6. A Crimson Warning
7. Death in the Floating City
8. Behind the Shattered Glass
9. The Counterfeit Heiress

Mark of the Lion Series

This series by Francine Rivers are the first novels I read by her, and I was instantly hooked. This trilogy follows the life of Hadassah, a young Jewish girl, who becomes a slave for a Roman aristocratic family.

The plot follows the high-spirited daughter, popular son, and another German slave training to be a gladiator. It is honestly without a doubt, not-put-downable.

Or you can buy all 3 books in the series in a bundle here.

This series by Bodie Thoene is set during World War II and follows characters and their brave efforts to stop the “growing tide of Nazi terrorism.”

Different characters in different cities during the backdrop of the war.

You can buy books 1-6 bundled here.

I love Janette Oke books. They are simple, sweet, and wholesome while still keeping you turning the pages to find out what happens.

This series follows one family for three generations and starts out with a “marriage of convenience” and leading at last to “an abiding love.” It is set on the prairie and details every day life, common hardships, and good old fashioned simple country living.

This series by Jan Karon is set in the fictitious town of Mitford, North Carolina and follows the lives of the various characters there. In the New York Times Bestsellers there is comedy, mystery, and good stories about every day people.

I have found these books to jump around very quickly which actually makes me feel a tad nervous while reading them, funily enough.

1. At Home in Mitford
2. A Light in the Window
3. These High, Green Hills
4. Out to Canaan
5. A New Song
6. A Common Life: the Wedding Story
7. In This Mountain
8. Shepherds Abiding
9. Light from Heaven
10. Somewhere Safe with Somebody

This series by Martha Finley follows the life of Elsie Dinsmore from when she’s an 8-year-old over the years of her life. It begins with Elsie as a young Christian girl without a mother struggling to connect with her father, and brings on a myriad of characters and situations throughout the years.

By 1945 the series was second only to Louisa May Alcott and the fist 12 books had sold more than 5 million copies. The series is very long, but for brevity’s sake I’m only including the first 10 books here.

Childhood Favorites That Are Must Read Series

Anne of Green Gables is one of my all-time favorite book series. She’s redheaded (like me) and intuitive (like me) and talks too much (like me). The books are sweet and innocent while still being profound.

An orphan girl finds herself adopted by an older couple in a country town and follows Anne through her youth into her own journey as a mother. Six kids! With a live in nanny!

Little House on the Prairie Series

Laura Ingalls Wilder has written a series of books centered around the Ingalls family and their life on the prairie. It’s heartfelt, sweet, and completely classic.

In my own grandmother’s words, “that’s been around 100 years!” Written by Arleta Richardson, this series tells the story of a young girl who delights her grandmother’s stories of “mischief, discovery and laughter.”

I can’t wait to read this series with my girl when she’s older.

This series by C.S. Lewis is appropriate for both children and adults and has the readers following children who travel between their present day and the magical world of Narnia.

There’s magic, mythical beasts, talking animals, and the writing is honestly so clever you will wonder at it being aimed for children.

1. The Lion, The Witch, and The Wardrobe
2. Prince Caspian
3. The Voyage of the Dawn Treader
4. Silver Chair
5. The Horse and His Boy
6. The Magician’s Nephew
7. The Last Battle

Or you can buy the complete set here.

Lord of the Rings Series

J.R.R. Tolkien wrote one of the most popular and famous fantasy novels in history. The books follow a cast of characters (hobbits, elves, humans, dwarves) in an attempt to stop evil from taking over Middle Earth.

It has sold over 150 million copies worldwide.

1. The Fellowship of the Ring
2. The Two Towers
3. The Return of the King

Buy the whole series in a bundle here.

The Wheel of Time Series

This (clean) fantasy series by Robert Jordan is a #1 international bestselling series that takes place in both the past and the future.

It tells the story of a man whose destiny is to face the Evil One and save the world.

Or you can buy the complete set here.

Brandon Sanderson wrote this trilogy which is bestselling and appropriate for young teenagers and older.

It’s set in a feudal society that’s deeply divided between the skaa (peasants) and the nobility.

1. Mistborn: The Final Empire
2. The Well of Ascension
3. The Hero of Ages

Or buy the complete trilogy here.